This Friday, Mum came to London. With holiday to take and not visiting the city as often as she used to, a girlie day was in order!

After spending the morning hiding from the rain in the V&A (an absolute must on the London museum hit list) we had worked up an appetite. We wandered back towards South Kensington with rumbling stomachs and greedy eyes, and stumbled upon the most perfect little place. Allow me to introduce you to Muriel’s Kitchen.

Muriel’s never fails to catch my eye when I’m in the area. Nestled behind South Kensington tube station, I have looked longingly into the cake filled windows many a time as I’ve rushed past. Fortunately this time, we didn’t have to rush anywhere.

Muriel’s Kitchen takes inspiration from traditional family recipes and firmly believes in the kitchen being at the centre of the home. Inspired by and named after the founder’s own grandmother, Muriel’s is meant to bring some homeliness to London’s hustle and bustle. It has offerings from breakfast to bedtime and only uses the finest, British sourced ingredients and many of the recipes are some of Muriel’s own. With locations in Richmond, Soho and South Kensington, Muriel’s’ chefs prepare and cook their meals fresh everyday. Where they can, they buy direct from family-run businesses.

If that’s not enough to draw you in, then the interior sure will. Again inspired by Muriel, the restaurants pay homage to her 1950s kitchen. Crammed full but beautifully bright, noticing the details around you is part of the fun of waiting for your meal! Pots and pans cover the walls, prints, mirrors, plenty of plants and recipe books cover every surface. It has a wonderfully country style (despite being in the centre of London!) and everything that you can see seems unique, with its own back story. 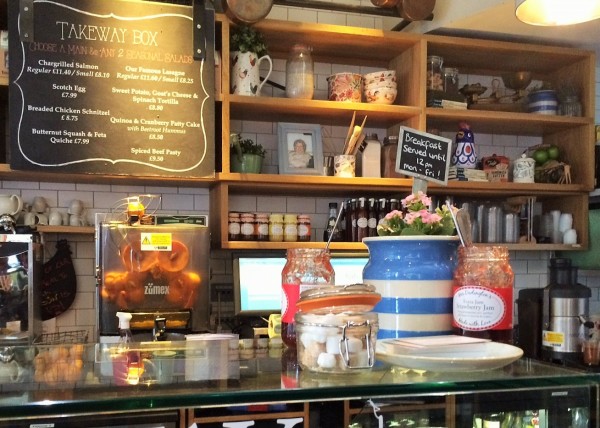 But anyway, we should get onto what we’re all really here for… the food! Muriel’s is special in having menus that change with the seasons, so they are always making the most of the freshest, seasonal ingredients. Their food seems to accommodate everyone from dawn till dusk, with grab and go options as well as offerings for those who want to hang around. It certainly makes a nice change to locating the nearest Pret, grabbing your regular lunch and running back to the office!

Standing out of the way of the busy workers grabbing their takeaway box or soup before running out of the door, we were shown to a table. After a quick perusal of the menu we decided to go for the English Sharing Platter. Platters are always a fun way to share and compare, and having stood by the kitchen watching the food get prepared there was plenty we wanted to try! I chose raspberry lemonade (a bold reminder of summer in such a seasonal restaurant) and Mum went for the Boosting Juice – apple, pear, beetroot and carrot. 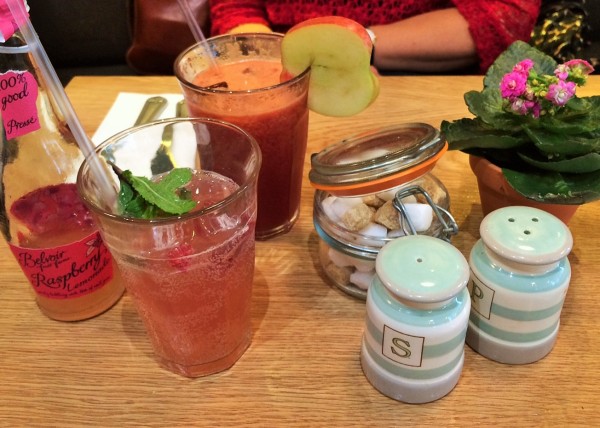 The food arrived quickly and we could barely wait to tuck in! Our sharing platter came with a homemade scotch egg, chicken liver pâté, butternut squash and feta quiche, cheddar, caramelised onion relish and rustic toast. As you can probably imagine, it was delicious.

Particular highlights were the quiche and the toast, which was delicious, thick bread. I would say that it can be shared by no more than two, and if you’re especially hungry it might not satisfy the both of you. There’s also a lot of cheese and pâté to a fairly small amount of bread, so we ended up ordering extra. Never a bad thing (as we got to sample even more of their breads!), but just something worth keeping in mind. Some kind of fruit might also have been a nice addition, but otherwise it was delicious and beautifully presented.

Full but with just enough room for a little something sweet, we crossed the road to visit one of my favourite Kensington spots, the Hummingbird Bakery. If you are in London and haven’t been already, just go. Cupcakes have been quite a thing for the past few years, but the Hummingbird Bakery’s cupcakes are hands-down the best.

We were amused to find their counters quite light on cupcakes by the time we arrived. Clearly we weren’t the only ones to get that Friday lunchtime feeling and decide that a treat was in order! 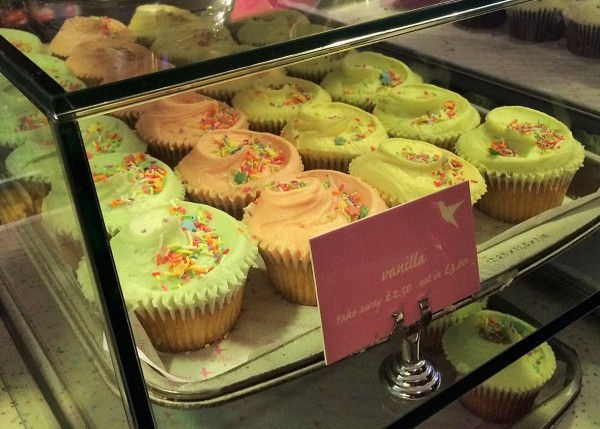 The choice may seem a little overwhelming but trust me when I say that red velvet is the only way to go. With cream cheese frosting and a ridiculously light, red sponge they are absolutely delicious. If only every Friday could be a foodie adventure through London…